The Philadelphia Science Festival is nearly upon us, and this Friday, April 20th, Laurel Hill is playing host to astronomers of all skill levels for the Citywide Star Party. Visitors are welcome to come point their telescopes, binoculars, and cameras skyward for a night of stargazing.

Certainly, our wide open, 78-acre cemetery is a great spot for this event, but whether our visitors know it or not, they’ll be observing the heavens in the company of two influential astronomers of the past.

Among his greatest achievements in astronomy was his recording of the transit of Venus on June 3, 1769, despite the fact that it didn’t go exactly as planned.

Rittenhouse began preparing to observe the transit a year in advance, working extraordinarily hard to make sure everything was in perfect working order in time for the event. He built an observatory on his family’s land in East Norriton, along with a highly accurate clock with which to time the transit. Unfortunately, all this hard work caught up with him, and he became ill in the month leading up to the transit. Nonetheless, Rittenhouse went into his observatory on June 3rd, prepared to record the data he’d worked so hard to obtain… and promptly fainted.

Luckily, he was there with two other observers who helped him (while also gathering the data they were looking for.) Rittenhouse awoke after the all-important first contact between Venus and the sun, and observed the remainder of the transit. The measurements he and his team took during the transit were still amazingly accurate, even in light of his weakened condition. As a result of his observations, Rittenhouse was able to calculate the sun’s distance from Earth as being about 93 million miles.

Rittenhouse lived to be 64 years old. He was originally laid to rest on the grounds of his observatory in center city, before being moved to the Second Presbyterian Church. When that burial ground closed, his family chose to have his remains moved again to Laurel Hill where he rests today. He is buried in Section P, Lot 61W and 62E. 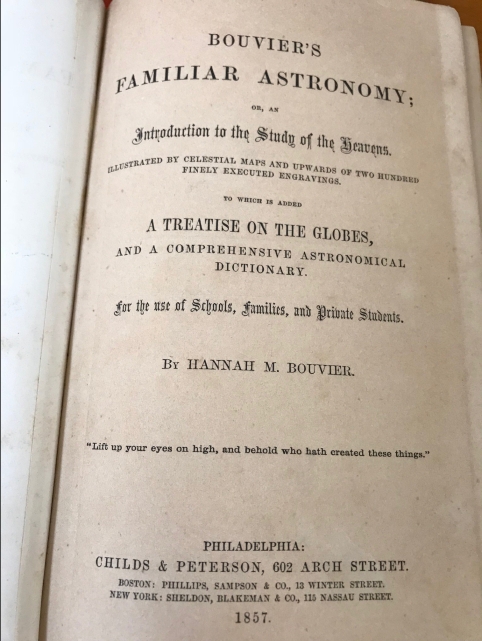 You may not have ever heard of Hannah, but if you had been around in the mid-1800s, you likely would have come across a copy of her astronomy book. With the amazingly lengthy title: “Bouvier’s Familiar Astronomy; or, an Introduction to the Study of the Heavens. Illustrated by Celestial Maps and Upwards of Two Hundred Finely Executed Engravings. To Which is Added A Treatise on the Globes, and a Comprehensive Astronomical Dictionary. For the use of Schools, Families, and Private Students.”

If you’re surprised to hear about a 19th century female astronomy expert, you’re not alone. Hannah is indeed a rare breed. In fact, Hannah disliked the attention that would come with being a well-known author so much, she would often publish either anonymously, or under her maiden name.

Her astronomy book was printed right here in Philadelphia, and its simple, question-and-answer style, along with it’s detailed illustrations and star maps, made it very readable and therefore very popular. It was used widely in Philadelphia schools.

The cemetery has managed to acquire an antique copy of the book, and amazingly, the final page of the book is filled with over 30 signatures of young women who had taken an astronomy class in 1864, and used this text book.

So, any ladies coming out to our star party, know that you’re in terrific company! Hannah is buried in Section F, Plot 81 and 82.

This Friday’s Star Party is free and open to the public. Click here to RSVP to this fun and educational event!