Special thanks to Laurel Hill tour guide and author Tom Keels for providing us with this wonderful written account of the life and crimes of Mabel Tinley – featured on our True Tales from the Tombs tour on October 12th. 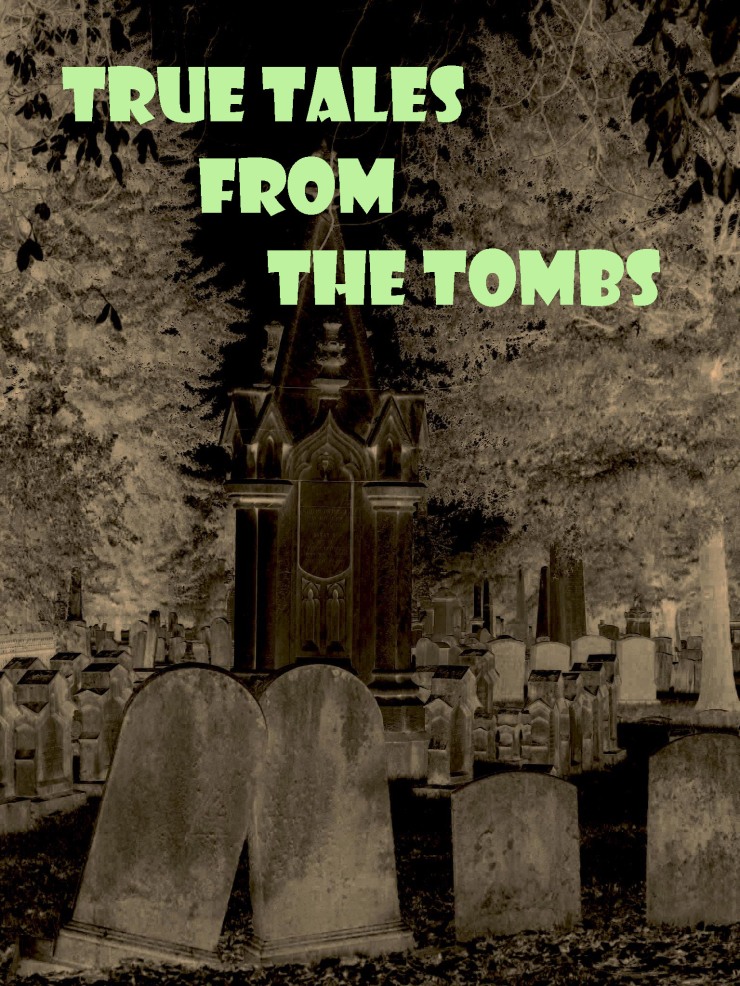 One of the many reasons I love leading tours at Laurel Hill Cemetery is the opportunity to discover the most sensational story hiding beneath the most unassuming monument.

A tiny grave with a sweet little dove memorializes a gunman for the Lanzetta Brothers, South Philadelphia’s notorious crime bosses, who was himself gunned down when he tried to infiltrate the Beaver County numbers racket.

A simple cross marks the grave of an influential diplomat who tried to save Czar Nicholas II and his family after the Russian Revolution.  (He failed but managed to extricate the Romanov wolfhounds.)   His wife, a mysterious Hungarian beauty, served him a cocktail in his hospital room after an operation and then watched him die in screaming agony.

Also buried here, but unacknowledged, is the Tinleys’ only child Mabel (d. 1908).   Perhaps there wasn’t room in the lot for a stone big enough to handle all of Mabel’s monikers:

And a host of other aliases, too numerous and transitory to mention.

All of these alter egos were products of Mabel’s febrile imagination during the fifteen years when she transformed herself from a simple Philadelphia maiden into one of the great con artists of Gay Nineties New York.  So here is Mabel’s story, presented like a true Victorian melodrama, with a prologue, an overture, four acts, and an epilogue.

It was the sensation of the 1892 summer season at Asbury Park, then one of the smarter resorts on the Jersey Shore.  On August 2, the Philadelphia Inquirer reported that Mabel Tinley, an 18-year-old visitor from Philadelphia called “the acknowledged belle of the fashionable Hotel Brunswick,” had eloped with Richard W. Roelofs, a young clerk with the Philadelphia Post Office.  Mabel’s mother Helen West Tinley, a widow living at 225 South Broad Street, was reported to be deranged with grief.

Roelofs, who had courted Mabel for a year despite her mother’s furious disapproval, followed his sweetheart to Asbury Park in late July.  Helen responded with a series of hysterical scenes whenever she encountered the lovers together.  Once, she ordered the young man from the hotel lobby, denouncing him as a scoundrel.  When a bellboy handed Mabel a bouquet of roses from Roelofs, Helen tore it from her daughter’s grasp and ripped it to shreds.  Finally, Mabel and Richard crept from the Hotel Brunswick and were married at the First Presbyterian Church of Asbury Park.  Upon learning of their marriage, Helen Tinley went berserk and called her new son-in-law every name in the book.

When the hotel manager threatened to evict all three troublesome guests, the newlyweds packed their bags and boarded a train for New York.  The devastated mother returned to her brick rowhouse, in the shadow of the new skyscrapers steadily advancing down South Broad Street.  Rumors swirled that she had hoped to marry the winsome Mabel to an elderly Chicago millionaire, only to have a penniless post office clerk smash her hopes for a secure future.

Mabel had many traits that would bewitch an ardent young swain like Richard Roelofs.  She was petite and well-made, with lustrous brunette hair, a dazzling smile, and large, limpid eyes that could mesmerize a man.  Lively and vivacious, she was fond of dancing and amateur theatrics.  She was always exquisitely dressed in the latest fashion.  Indeed, many of her neighbors wondered how Mabel could constantly appear as well turned-out as a Rittenhouse Square heiress on her mother’s modest income.

Unbeknownst to her ardent swain, Mabel possessed a greedy, almost monomaniacal, hunger for jewels, elegant clothes, and fine living.  Mabel longed to dwell among the cream of society, and she would say anything or cheat anyone to rise to the top.  It helped that she was a pathological liar, able to slip easily into a fantasy world and drag others along with her superb acting skills.

Eager to make his fortune, Roelofs moved his new bride to the town of Cripple Creek in central Colorado.  Cripple Creek was Ground Zero for the Colorado Gold Rush that had begun in 1890.  It was a roughhewn, ramshackle mining town that sprawled in all directions, struggling to house a population that had exploded from 500 to over 10,000 in only three years.  The town was rife with miners’ strikes, drunken brawls, and brothels.  One madam, Leola Ahrens, livened up an otherwise dull afternoon by standing on a downtown street corner stark naked and screaming “I’m Leo the Lion, the King of the Row!”

Cripple Creek was not the environment that a delicate Eastern flower like Mabel Roelofs found conducive to happiness.  When Helen Tinley died in 1894, Mabel rushed home to Philadelphia, hoping to gain control of her mother’s $5,000 estate.  Motivated by either spite or prudence, Helen had set up an airtight trust with the Union Trust Company that provided Mabel with a measly annual income of $200.  This wasn’t enough to cover her tab at the elegant Palmer House on Chestnut Street.  During her stay, Mabel scandalized other guests by appearing in low-cut gowns at dinner, dubious attire for one supposedly mourning a parent.

Smarting from her financial disappointment, Mabel returned to Colorado, where her husband Richard was now superintendent for a struggling operation called the Cripple Creek & Victor Gold Mine.  Their only child, Richard Jr., was born in August 1894.  The following year, Mabel high-tailed it back to the East Coast with baby in tow, spending the summer in Atlantic City at the elegant Pennhurst Hotel.  It was there that Mabel launched her career as a grifter, although it was whispered that she had fled Cripple Creek after running up too many debts there.

In July 1895, Mabel Roelofs was arrested in Philadelphia for passing bad checks at Gimbels and other local firms.  She had also sweet-talked several men into lending her sums ranging between $135 and $1,000 in a check kiting scheme.  Mabel presented herself as heiress to a $40,000 inheritance.  Her male victims were smitten by this charming, exquisitely dressed, well-spoken young lady momentarily short on funds while she struggled to resolve her mother’s estate.  The benefactors would accept one of Mabel’s checks drawn on a Cripple Creek bank in exchange for one of theirs drawn on a Philadelphia bank, which Mabel would cash immediately.  Given the slow pace of banking in this pre-electronic age, it might be weeks before the pigeon would receive Mabel’s check back from Cripple Creek, marked with a large red “NO FUNDS” stamp.  By this time, Mabel would have moved on to her next mark.

By early August, Mabel’s numerous creditors joined forces to bring her to court for fraud.  While Mabel awaited trial in Moyamensing Prison, the proprietor of the Pennhurst Hotel in Atlantic City scrambled to find someone to take care of her baby.  The loving mother had left Richard Roelofs, Jr., behind as collateral when she went on her Philadelphia spending spree.  Eventually, the charges against Mabel were dropped.  Her victims were tired of the public embarrassment, unwilling to pay to bring in witnesses from Cripple Creek, or aware that their legal expenses were rapidly surpassing the amounts they had lent Mabel.

Mabel returned to Atlantic City long enough to collect her son and trunks, and to stiff the long-suffering proprietor on her sizable bill.  She then vanished, only to be reborn a short time later in New York City…

Like this story? There are hundreds of stories just like this buried within Laurel Hill. Be sure to check out our Fall Event Lineup for your chance to hear more. Might we recommend our Soul Crawl Halloween Flashlight Tours, to start?

Mabel’s story will be told in 5 parts, with one part being posted every day. Be sure to check back tomorrow for part 2!