At Laurel Hill, we certainly celebrate the fact that we’re an important historic site, but let’s be honest… part of what makes cemeteries so cool and alluring is the spooky factor. Cemeteries and ghost stories go hand in hand, and many of our guests have wondered if Laurel Hill is haunted; in fact, it’s one of the more frequent inquiries we get on our tours.

With approximately 77,000 souls resting on our grounds, this seems like it could be a prime haunting location. Paranormal investigators are regularly on the premises looking for signs of restless spirits bearing important messages for the living. Free Spirit Paranormal Investigators will be here this Friday, May 4th, and you are invited to join in on the ghost hunt.

So, is there life beyond the grave, and does Laurel Hill hold any clues?

The official answer is that the investigation is still open, and probably always will be. But when you consider some of the stories around Laurel Hill, it’s not so hard to believe there might be otherworldly guests roaming the grounds.

If we had to choose 5 potential hauntings, we’d go with these… 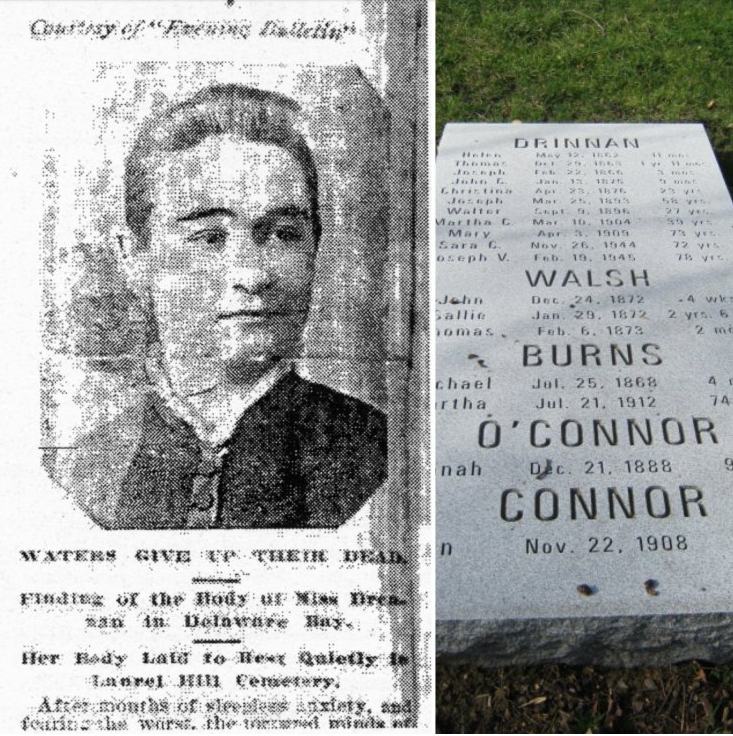 In 1903, Martha was the daughter of Laurel Hill’s caretaker. At 39, she was an unmarried spinster and tended to be a little on the quiet side. On a Sunday morning in November, she was seen heading towards the Laurel Hill train station which used to be located on the north side of the cemetery. Later, she was seen walking along Kelly Drive. She didn’t speak to anyone, or let anyone know where she was going.

It was the last time she was seen alive.

In March of 1904, a fisherman discovered a headless body floating on an ice drift in the Delaware Bay. Martha’s brother and aunt traveled to New Jersey to identify the body, and confirmed it was Martha by the dress she wore. Her remains were buried on the grounds here at Laurel Hill with no marker, as her family was too poor to afford one.

What happened to Martha? Did she meet her end at the hands of an attacker? Did she slip on some ice and suffer a tragic accident near the river? Did she take her own life? We may never know the answer to these questions.

The Friends of Laurel Hill have since placed a marker on her grave, which we hope helps her rest a bit easier, despite the continuing mystery. 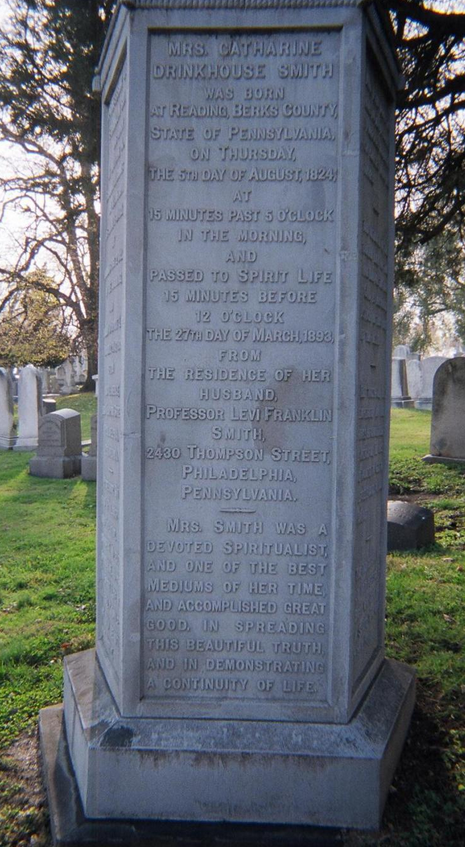 If you’ve ever noticed a monument just south of our gatehouse (across from Adrian Balboa) which strikes you as unusually wordy, you’re looking at the final resting place of the Drinkhouse-Smith family. It’s a remarkable monument, because it offers up the kind of minute details rarely seen on grave markers: street addresses of the deceased, favorite quotes, religious affiliations, and the exact times each family member died.

Yet, for all that information offered up, we know almost nothing about Catherine Drinkhouse-Smith or her family, save one detail… they all ascribed to spiritualism.

Spiritualism, which reached its height of popularity around the late 1890s, is the belief system which posits that the dead continue to live on as spirits, and that they have both the ability and the desire to communicate with the living. Spiritualists would mainly attempt to contact the dead through the use of séances, where especially sensitive people known as mediums would help guide the conversation. According to her monument, Catherine was a medium herself.

Given Catherine’s strongly held beliefs in an ongoing spiritual life, it seems to us that she might be especially interested in trying to communicate from the other side. 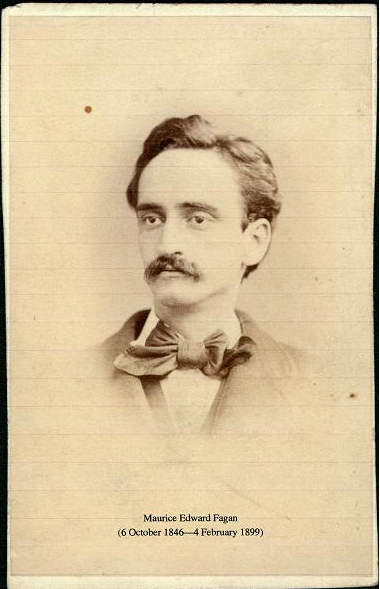 After serving in the civil war and being honored twice for gallantry during the conflict, Maurice was plagued by terrible pain in his head. Doctors at the time diagnosed him with vague illnesses like rheumatism or neuralgia. Today, some wonder if he might have been stricken with migraines, or perhaps some form of PTSD. Either way, the pain was intense, and it drove Fagan and his family to distraction.

Despite seemingly getting his life back on track after his military service, Fagan continued to be tormented by pain for the rest of his life. When he realized that no medical intervention was helping, he sought to take matters into his own hands.

In a letter to his younger sister, he explained that he would soon rest among their departed family members at Laurel Hill. Sadly, he was correct. Maurice went to his family plot, and ended his life with a gunshot to the head – likely in an attempt to put an end to his pain once and for all. 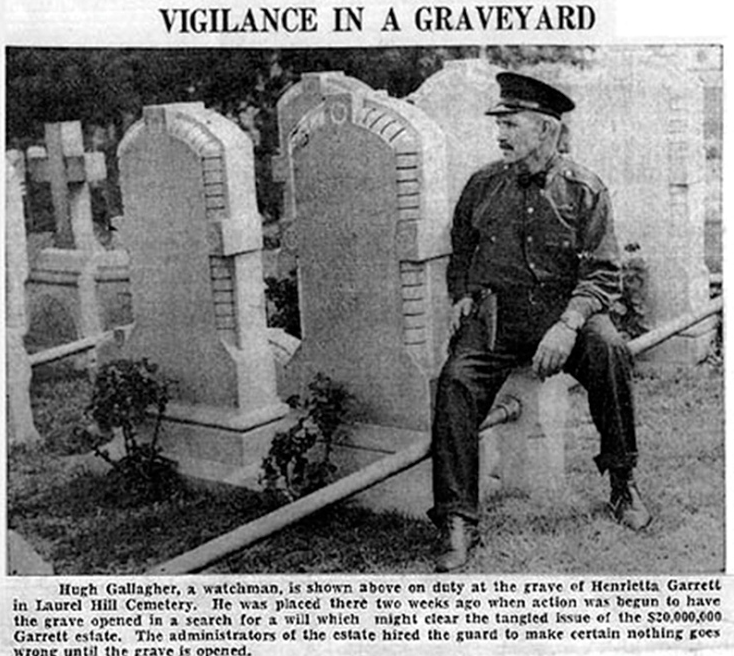 Do spirits grow restless when they have unfinished earthly business? Perhaps because their remains were disturbed? In either case, Henrietta Garrett makes a great contender for a haunting.

Henrietta was a young, relatively poor woman when she caught the eye of millionaire Walter Garrett. He owned a snuff tobacco company and was very wealthy as a result. The two married (much to the chagrin of Walter’s family) and by all accounts, the couple was quite happy until Walter’s death.

In his will, Walter left his 6 million dollar estate to Henrietta. We may never know exactly why Henrietta didn’t make a complete will of her own, but by the time she died some 30 years later, she had only accounted for a small percentage of what, by then, was a 17 million dollar fortune.

Henrietta had the misfortune of dying in November of 1930 – approximately one year  into The Great Gepression. Desperate people from all over the world began surfacing, and claiming some kind of relationship to Henrietta, and hopefully thereby inheriting her money. In the end, over 26,000 people made claims, and a special court was set up just to hear them.

Somehow or other, a rumor got started that Henrietta had been buried with her will. This sparked a public outcry calling for her exhumation. Laurel Hill felt so much pressure about this matter that they posted a 24-hour armed guard at her grave to ensure that nobody tried to dig her up themselves.

Eventually Henrietta was exhumed, and the entire process was photographed and filmed so the lawyers could prove that a will either was or wasn’t found with her body.

After a media and legal circus lasting over 20 years, it was determined that 2 of Henrietta’s cousins would each get 2 million dollars. The rest of the money went… where else? To legal fees from all the court hearings.

If Henrietta has an opinion about all this, perhaps she would want to voice it somehow. 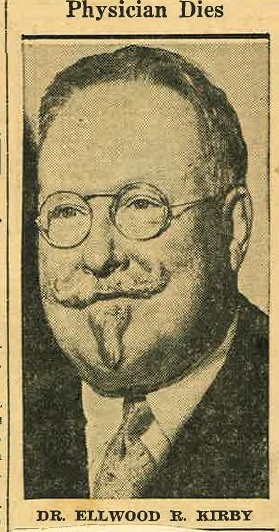 Dr. Kirby is another spirit which didn’t exactly get the chance to rest in peace. Perhaps the way his remains were treated at the hands of vandals makes him another great candidate for a haunting.

Ellwood Kirby made his living both teaching and practicing medicine. He amassed a great deal of money in his time, which made him both very wealthy and very charitable. He was known to offer medical care to the elite of Philadelphia, but also to the impoverished (at no charge, of course).

He died in his sleep from a heart attack on Christmas night, 1935, and left behind a small fortune which was divided among his family members and favorite charities.

He was buried in his family mausoleum where he rested silently for… about 10 weeks.

A group of vandals got the idea that Kirby had been buried like a pharaoh with gold and jewels strewn about his grave. Between Kirby and the story of Henrietta Garrett above, it really seems like this idea took hold frequently during The Great Depression. The vandals waited for a dark night without much traffic, and scaled the cemetery walls.

They broke into the Kirby family mausoleum, dragged the heavy casket outside, and pried it open. Upon finding no glittering gems among the remains, they decided to strip the corpse naked, thinking that all the treasure must be on the body. In the end, all they found were a pair of $10 cuff links, which they promptly stole.

Dr. Ellwood Kirby was taken to the receiving vault where he was dressed in new clothing, and placed into a new casket – all before the press had a chance to come in and photograph the scene.

If there’s anyone who might have a few choice words for his postmortem attackers, it just might be Dr. Kirby.