When Queen Victoria lost her husband, Prince Albert, she entered a period of deep mourning which lasted the rest of her life. She also boosted a trend of mourning culture which would reach into every aspect of Victorian life.

Say what you will about Victorians, but they sure knew how to design a gravestone. In comparison, modern cemeteries with their uniform headstones, and height regulations look a bit boring and “same-y.” But to the Victorians, death was a part of life. Mourning the loss of a loved one was a public affair, and it affected everything from their style of dress, to the stationery used for correspondence, to elaborate viewings, funerals, and finally, grave markers.

Talking about death was much more accepted socially, but a person couldn’t always sit by the side of their loved one’s grave to tell their sad story to people passing by. Instead, Victorians developed an unspoken language, and incorporated it into their memorial artwork. A lot could be communicated through imagery. Was the person young? Religious? A veteran? Wealthy? Did they die as the result of violence? All these questions could be answered with a glance.

This weekend, fans of cemeteries and Victoriana in general will have a great chance to experience Laurel Hill as a sculpture garden on the Sacred Stonework tour. Although whether you can make it out to visit us on Saturday or not, the next time you come to our peaceful necropolis, be sure to look for examples of the following symbolism, then impress your friends with your ability to interpret the language of death. 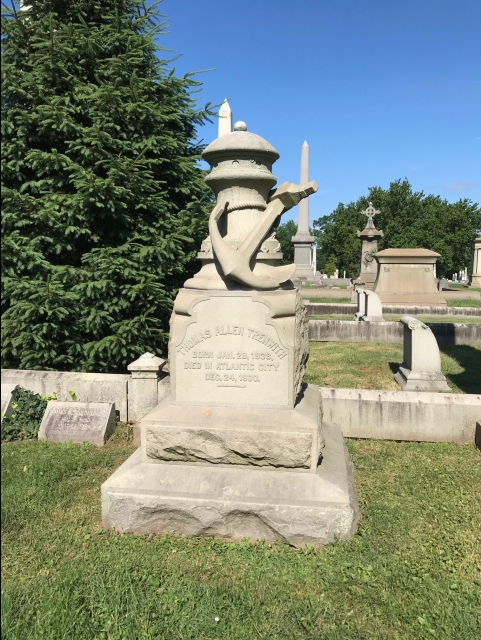 Anchors – In some cases, the anchor may be a straightforward nod to seamanship, or Naval service, but in other cases, an anchor is a disguised Christian cross. Laurel Hill is a non-denominational cemetery, not ascribing to any particular faith. It’s possible that some people wanted to show their faith in less overt ways here.

Angels – Messengers from god, angels signify a divine or heavenly presence. They may indicate that the deceased was a very religious person, or they may be there in the hopes that they will help point the soul towards heaven. 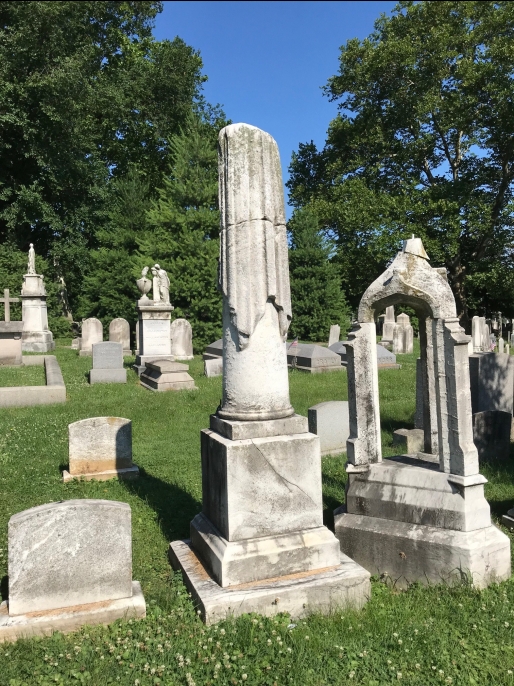 Broken Pillar – Pillars usually symbolize a good, long life, but when they are intentionally sculpted to appear broken or unfinished, it means a life has been cut short. Often used to mark the graves of young people, or the graves of murder victims. 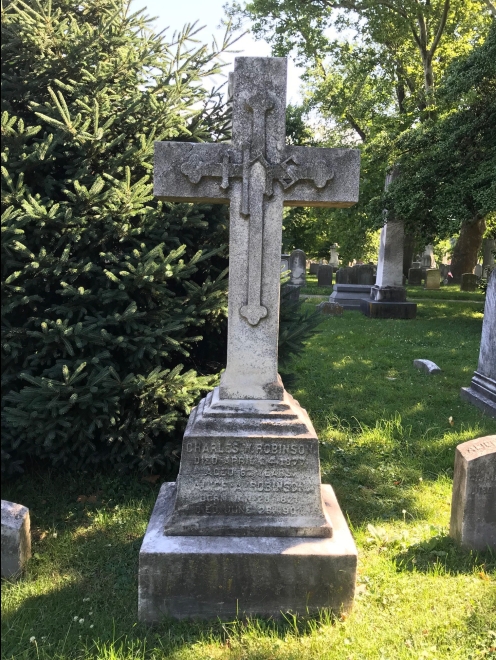 Catholic Cross – “IHS” is what’s known as a christogram, or an abbreviation of the name of Christ. It’s technically abbreviating the Greek characters:  IHΣΟΥΣ. “IHS” is meant to reference the Greek letters iota, eta, and sigma, or the first three letters of Christ’s name in Greek.

Celtic Cross –  This cross appears as a standard Christian cross, with a circle around the place where the beams meet. The circle is meant to symbolize eternity. Celtic crosses often have what’s known as “knotwork” carved into them. Knots in Celtic culture symbolize resurrection and everlasting life. 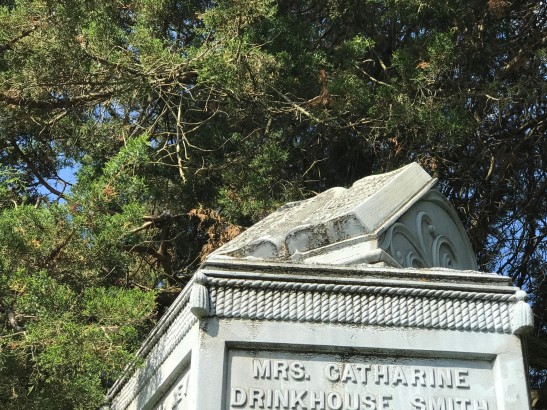 Book – Denotes learning, education, or spiritual study. Books are often open, showing that reading and study was an important part of this person’s life. The book pictured here sits atop the grave of a noted spiritualist medium.

Egyptian Symbolism – In the early 20th century, there was a renewed interest in all things Egypt, thanks largely to the discovery of King Tutankhamun’s tomb. This style of architecture and sculpture is collectively known as “Egyptian Revival.” Many Egyptian symbols represent the afterlife.

Growing Things (plants) – Flowers and funerals have gone hand in hand for thousands of years. Each type of flower may have its own meaning. For example, lilies represent the resurrection, poppies represent sleep and rest, and roses represent youth, love, and beauty.

Inverted Torch – An inverted torch symbolizes death, but note that the torch is still burning. This is an image meant to depict life after death.

Lions and Oak Leaves – Strength, stability, endurance, and protection. Both of these symbols also have Christian connotations, as the cross from the crucifixion was believed to be made from oak, and the lion is symbolic of the Christian god’s power.

Masonic Symbols – The compass and set-square are a very recognizable symbol of the Freemasons, and it represents both spirituality and lawfulness. Laurel Hill has 17 Grand Masters of the Freemasons buried here.

Obelisks – Another Egyptian symbol, the obelisk can represent eternal life, heaven, or even the rays of the sun shining down forever on the deceased. Certainly, the Washington Monument (dedicated in 1885) influenced many Victorians. The tallest obelisk in the cemetery belongs to former Philadelphia mayor, Edwin Fitler. It is 55 feet tall, and therefore a 1/10th scale replica of the Washington Monument.

Shrouded Things – You will see many draped objects in the cemetery. The shroud is a general symbol of mourning, but it may also symbolize a parting of the veil between this world and the next. Drapery was also an outward expression of mourning in Victorian times, as heavy black fabric would be draped throughout the homes of those in mourning. 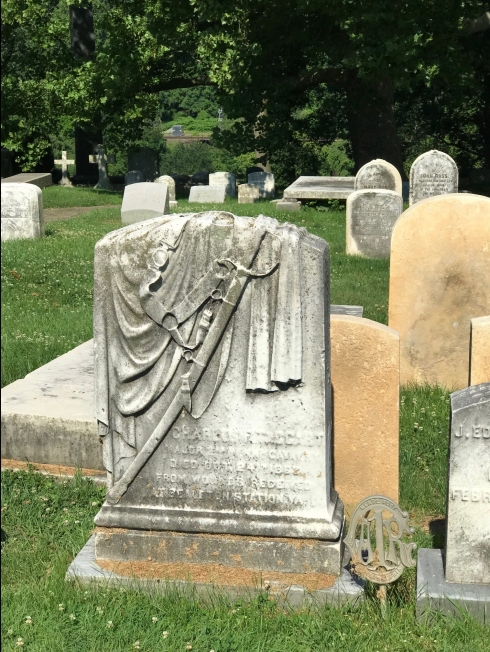 Unopened Bud – Flowers which have not yet had a chance to bloom often adorn the graves of children. This especially sad symbol can be found in many Victorian cemeteries.

Urns – Although urns are used today to contain cremated remains, hardly any cremations were done in the Victorian era. Urns were used as a general funerary symbol to show mourning.

Weeping Figure – A general display of grief and mourning. The weeping figure can sometimes symbolize an untimely or early death. 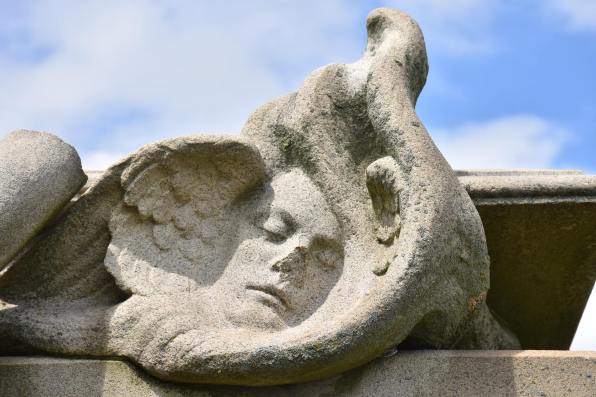 Winged Face – A depiction of the soul of the deceased. This monument to William Warner shows a winged face escaping a tomb. 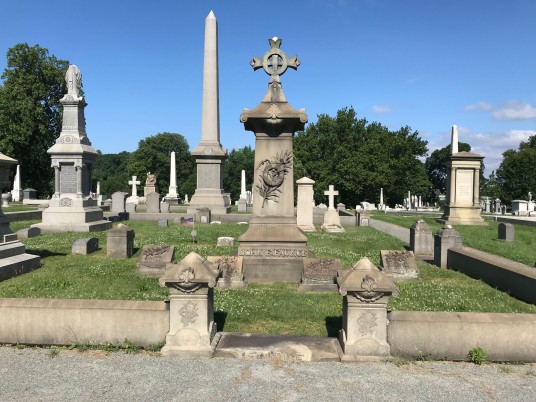 Wreath – As a circle with no beginning and no end, wreaths can represent eternity. An evergreen wreath represents everlasting life.

Do you have a favorite grave symbol? We’d love to hear from you in the comments!

Saturday’s tour is just one of many we offer here. To keep on top of all the events in our cemetery, be sure to sign up for our mailing list.

5 thoughts on “Cemetery Symbolism: What Do Those Mysterious Momuments Mean?”