Happy Friday the 13th, everyone! In honor of the day, we want to take this opportunity to discuss a cemetery superstition we get asked about a lot on our tours. Namely, “Am I standing one someone right now,” usually followed up by “…and isn’t that, you know, bad luck?”

The answer to that question is “Yes… and no,” but there’s a lot of history wrapped up in that simple question.

The History of Cemeteries 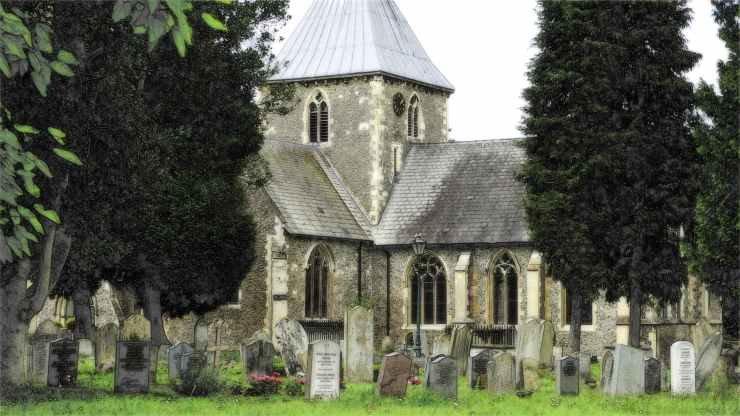 Before the 1830s, most people buried their dead in one of two ways: on private property owned by the family, or in the consecrated grounds surrounding (or underneath) the local church. This is where the term “churchyard” comes from.

As more people moved into urban centers, cities grew and buildings began to close in. People depended more and more on the churchyard as the only available place to put their dead to rest. You can probably imagine that this led to a massive problem with overcrowding.

Churchyards became unsafe, unsanitary eyesores, and people like Laurel Hill’s founder, John Jay Smith, sought to do something about it. After losing his daughter to an illness, he went to visit her grave at Friends graveyard on Cherry St., only to discover that he couldn’t find it. He was so appalled at this, he began planning a rural cemetery shortly after having that experience.

This is how Laurel Hill and many other rural, garden cemeteries came into being. They were envisioned as public parks where people could picnic, take carriage rides, and stroll the grounds.

Did you hear that? Stroll the grounds.

From its very first day, Laurel Hill was meant to be a place for walking, and this inevitably means walking over, or standing on, grave sites. That was always part of the rural cemetery experience. They were planned as a place for the living and the dead to coexist. Visitors were encouraged to wander, to take in the views of the river, and to get up close to read monuments. Nothing about that was disrespectful, or unlucky.

In other words, Victorian Philadelphians did exactly what we do today when we go on a tour here.

What Happened to the Churchyards?

Some families chose to move their loved ones out of the overcrowded burial grounds and into more serene, picturesque places like Laurel Hill. But not every body (note the space there) was moved, and not every churchyard was properly shut down.

Nearly every year, some construction project or other will have to suddenly halt, because a group of workers discovers coffins, skeletons, or both while digging. This usually marks the discovery of a churchyard, a potter’s field, or perhaps a private burial plot from an old property.

This is such a well-known problem in Philly, that Janet Monge, curator-in-charge of the Penn Museum’s physical anthropology section is quoted: “I sometimes say if you put in a shovel in the ground… you should expect to find a human skeleton.”

In other words, you’re probably standing on somebody more often than you think – especially in Philadelphia. If the superstition was true, you should expect terrible luck every day. We hope that’s not the case.

The History of the Superstition

The discomfort people feel about standing on a grave probably comes from a good place. They want to be respectful in a cemetery (something we very much appreciate) and the thought of stepping on someone just feels wrong somehow.

But speaking practically, there’s no way to avoid it here. There are over 70,000 souls buried in Laurel Hill, but the monuments number somewhere in the low 30,000s. This means that even if you avoided what seems like the grave space in front of every single monument, you might still walk over thousands without even realizing.

There’s an expression “Someone just walked over my grave,” which is said when a person experiences a chill, or a feeling of dread for seemingly no reason. This has probably added to the idea that it’s not appropriate to walk over graves.

But take it from the staff here at Laurel Hill, we walk over graves every day, and it’s okay! We want you to come out and enjoy the space, to take tours, and to learn about all the amazing Philadelphia history that’s here.

We promise there’s nothing unlucky about that.

1 thought on “Cemetery Superstitions: Am I Standing On Someone?”